There isn’t much to say about Chrono Trigger – the content itself – that hasn’t already been said thousands of times. It can be put into text form, but it’s more fun to see for yourself how disappointing this port was on original release.

Square Enix released Chrono Trigger, along with Final Fantasy 1 and 2 and some other titles, on Droid and iOS devices many years ago. I believe I bought Chrono Trigger on Android some time in at least 2013, perhaps early 2014. In order for them to do so, they evidently had to throw the UI in the trash and replace it with a new touch-screen functional version that sheds the original layout and replaces it with something modern and ugly. Crisp, clear, large text juxtaposes with the rest of the game which maintains the original 16-bit graphics. As pretty as the game was, thank you Akira Toriyama, overlaying something modern and cleaner over top of it just makes it all look bad. 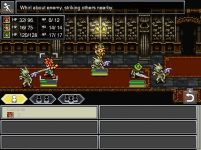 But that’s not where the travesty ends. They also changed the graphics – the scanning method, even the sprites used on the world map are different and “modern.” For example, the world map has tiling issues where the textures don’t make any sense because they didn’t construct the graphics the way they were intended.

Or you can see here, for example, the difference between the “orginal graphics” patch (right) and the way they filtered the textures in the mobile/original vanilla release (left). The port neutered the intricacies of the original pixel art by doing what is the equivalent of going into Photoshop and using the smudge tool. It might seem smoother or seem to make more sense, but it’s a significant change to the graphics that isn’t right.

At this point the game has been patched multiple times (June 2018) to undo the disservice Square Enix has done, but they doomed the game to sell poorly. Despite easily being one of – arguably the best – old JRPG ever made, and having the same content with better performance than the DS version, this port seems dead on arrival. It maintains a mixed review score on Steam store and most people aren’t going to pick it up until it’s on a large discount. Knowing Square Enix, and judging by how the Final Fantasy games on  Steam  have remained at least $10 each for years and years, it’s going to be a long time.